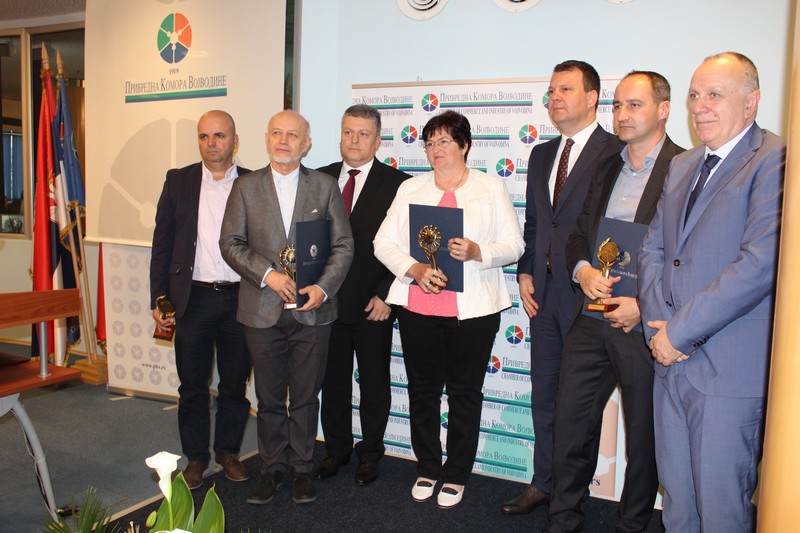 Today, The President of the Chamber of Commerce and Industry of Vojvodina (CCIV), Boško Vučurević, and the Prime Minister of the Provincial Government, Igor Mirović, presented the Annual Prize of the CCIV for significant economic achievements in 2017 at the premises of the CCIV.

Three corporations and two individuals were awarded. For their successful business and exceptional results this year’s laureates are JP “Transnafta”, Pančevo, in the field of industry, “Mikromarket NS doo” of Novi Sad, in the field of services and “Doo Vrebalov agrar “, Novi Bečej in the field of agriculture. Katalin Mužlai, the owner of the family dairy cow farm “Mužlai” from Bačko Gradište was declared the best businesswoman while the award for the most successful businessman went to Miroljub Kršanin, Chairman of the Board of Directors of Tehnomarket doo, Pančevo.

In his address, the Chairman of the Provincial Government, Igor Mirović, congratulated the winners, pointing out that no economic development of the society may exist without the entrepreneurism and creativity of individuals, a regulated economic environment and a well-designed and determined economic policy.

“Our country as well as our province has been the best of examples of this in the last few years. Continuous growth of gross domestic product, the expansion of investments and the creation of new jobs, steady increase in industrial production and exports and, finally, a rapid decline in unemployment are the best evidence of this”, said Mirović.

At today’s ceremony, the President of the CCIV, Boško Vučurević, pointed out that the CCIV had been and also remained a place where business people gathered and exchanged their ideas and experience, a place, he said, where connections were established between all those who had had a substantial impact on the creation of a stronger economic environment.

“As a significant service to business people in their daily business activities and support in strengthening market competitiveness, we launched an internal reform and intensified all our activities last year. You, business people, are the most important partners in all the segments of our business”, said Vučurević, adding that award-winning business people do encourage others in directing their capacities intensely, as he said, towards achieving quality, efficiency, excellence and competitiveness.

President Mirović emphasized today the special role of the CCIV as well saying that the role of such an association is irreplaceable.

“I have to say that this Chamber fulfills this role more and more efficiently, and for that, it deserves special recognition today as well,” said Mirović.

On behalf of this year’s winners, the Director of JP “Transnaft”, Tomislav Basta, addressed the gathering, thanking for the honour and saying that the recognition received from the CCIV was an additional motive for all employees and an incentive and new energy for the whole company in labouring for new, future successes.

“I am very pleased and honoured that this company has won such a prestigious award. You feel good when someone follows your work, rates it positively and says that it is successful,” Basta pointed out.

The ceremony was complemented by Jovan Tomić, a student of the first grade of the Secondary Music School “Isidor Bajić”, in the class of professor Goran Penić, from the Accordion Department, who performed a piece by Bela Bartok entitled “Six Romanian Dances”. The host of the programme was the editor of the Radio Television of Vojvodina, Kristina Nenadović. By their presence, the ceremony was enhanced by the Deputy Prime Ministers of the Provincial Government: Djordje Milićević, Mihalj Njilaš and Ivan Djoković, Provincial Secretary for Agriculture, Water Management and Forestry, Vuk Radojević BSc, Directors of Regional Funds, representatives of the Serbian Chamber of Commerce, the Chamber of Commerce of Kosovo and Metohija, the Serbian Armed Forces, the Chamber of Commerce of the Republic of Srpska, many business people as well as representatives of the media.