THE CHAMBER OF COMMERCE AND INDUSTRY 1919-2019On 1st February 2019 it will be a century that the Chamber of Commerce of Vojvodina, with its preceding organizations, whose traditions it originates from has been existing and working continually. A century is a measure of the time that may reliably determine the permanence and worthiness of one’s role and place within the activity they are engaged in and the environment in which they act. The century of the existence of the Vojvodina Chamber of Commerce is certainly a historical period representing the prominence of this economic institution throughout the turbulent decades of the previous century burdened with great historical turns and sudden social changes.

From the time of the emergence of the first fraternities in the territories of the South Slavs, recorded in the Dubrovnik Republic at the beginning of the 13th century, whose influence spread with the establishment of the Dubrovnik trade outposts in the cities of Serbia and South Hungary, through the emergence of trade and craft guilds in almost all the major settlements within the areas with a significant Serbian population north of the Sava and Danube, all the way to the emergence of the first trade, industrial and crafts chambers in this region, there has always been a tendency for members of related economic activities to unite in order to protect their interests and achieve their rights and goals more easily and successfully.

By the establishment of the first trade, industrial and crafts chambers in the Habsburg Monarchy, in the mid-19th century, which followed the trail and tradition of the chamber system, established in France as early as in the second half of the 17th century, they were established as the institutions of state economic policy. The first such chamber for the region of Vojvodina was founded in Timisoara in 1850, and its jurisdiction covered the entire area of the Voivodeship of Serbia and Banat of Temeschwar, as a separate administrative unit of the Great Empire, from 1849 to 1861. After the abolition of the Voivodeship of Serbia (1861) and after the Austro-Hungarian Compromise (1867), the jurisdiction of today’s Vojvodina comprised three trade and industrial chambers with their seats being in Szeged, for the territory of Bacska, in Timisoara for the region of Banat and in Osijek for the territory of Syrmia. Such a system of chambers of commerce, which brought together traders, industrialists, craftsmen and farmers, combined their interests providing them better interconnections and a more successful business environment, was in place until the end of the First World War and the breakup of the Austro-Hungarian Empire in 1918. 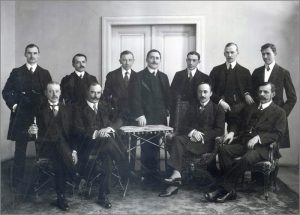 After the accession of Vojvodina to Serbia by the end of November 1918 and the creation of the first joint state of the South Slavs – the Kingdom of Serbs, Croats and Slovenes – immediately after it, setting up trade and industrial chambers proved to be necessary. For the area of Vojvodina, a region with developed trade and crafts as well as industry, which was still at its beginnings (but still the most developed in the new state, after Slovenia), two chambers of commerce were soon established, which were supposed to unify and protect the interests of their membership. 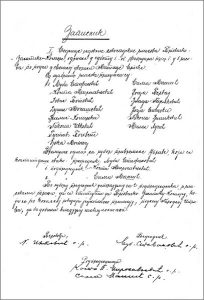 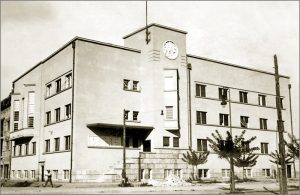 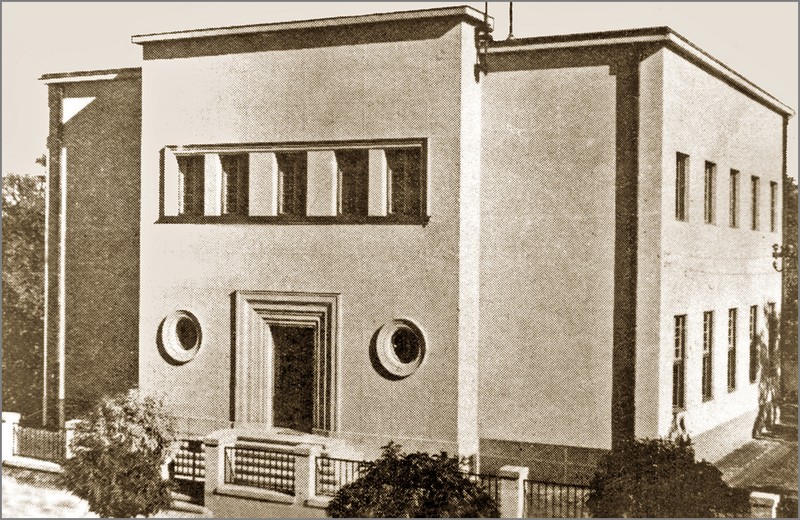 Seats of the Chambers of Commerce in Novi Sad and Veliki Bečkerek – Petrovgrad, between tyhe two world wars

Between the two world wars, the said chambers faced numerous obstacles and difficulties in their work although, in the course of time, in spite of unstable political conditions and an atmosphere of constant legal and economic uncertainty, their operations were becoming increasingly more successful and organized for the benefit of their members. The main objective of the chambers was to exert influence on commercial law-making in order to facilitate more prosperous commercial relations for their members, to enable a better cooperation with international commercial entities, to organize or assist the organization of events where the economic capabilities of their members were presented, to help the education and training of new staff within the businesses conducted by the members, to create the business registers of their members, to resolve disputes among the members, to take care of the pension fund of the membership, etc. By the end of the 1930s, the chambers became profitable institutions which, through a series of their own businesses, enabled a more active care for the already wide range of members. 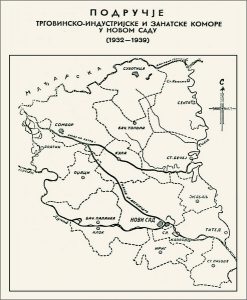 The work of the Vojvodina chambers died away during the occupation (1941-1944); after the liberation, it acted on old grounds, for a short time, although from as early as 1946 the chamber system that had existed before was replaced by a new one operating in the spirit of the ruling socialist ideology. Between 1946 and 1962, the chambers were organized as per the branch principle (separate crafts, catering, trade and agricultural chambers existed), and from 1962, by establishing the Provincial Chamber of Commerce, a single chamber system was established on the territory of the Autonomous Province of Vojvodina.

Since that time, the Chamber had a greater impact on the business environment and regulations, but its role was constantly constrained by the ideological framework of the ruling system. In 1974, the Provincial Chamber of Commerce was renamed the Chamber of Commerce of Vojvodina which, at the time of the new changes of the constitutional system of the SFRY and the accentuated autonomy of Vojvodina (1974-1989), had a growing and increasing importance in the organization of the entire economic life in the province. At this time, the CCV had a wide range of legal powers, being engaged in the improvement of production, the circulation of goods and services, increasing labour productivity, applying modern technical and technological procedures and rationalization in work and business operations, the improvement of the conditions and organization of work and business, harmonizing the construction, reconstruction and utilization of capacities, the improvement of business and other associations, business and technical cooperation, general cooperation and specialization, improvement in the placement of goods, commodity exchange, securing the unity of the Yugoslav market, etc. 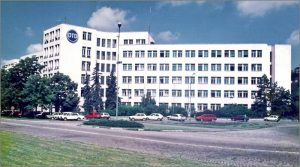 The edifice of the Chamber of Commerce of Vojvodina during the second half of the 20th century.

After the breakup of the SFRY, the work of the Chamber of Commerce of Vojvodina, during the last decade of the 20th century, was conducted under great temptation (wars, sanctions, economic and political isolation, hyperinflation, the collapse of the common market, substantial decline in production and the general standard of living, “blooming” of the shadow economy) and clearly defined social changes and economic conditions, with the lack of a legal framework that would determine the place and competence of the chamber system. In the time of complete centralization at the beginning of the 1990s, there was also the tendency to close down the Chamber of Commerce of Vojvodina as an independent institution and merge it into a larger, Serbian chamber system. Fortunately, this has not happened.

Following the democratic changes in Serbia in the autumn of 2000, the chamber system was legally determined, and the conditions of economic activities have become much more regular and stable. Therefore, the work of the CCV could again become considerably more comprehensive and have a larger scope than in the previous decade. 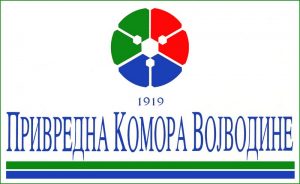 Logo of the Chamber of Commerce of Vojvodina

The importance of the Chamber grew substantially during the period of the privatization and transition of the economies of Serbia and Vojvodina. International cooperation and the re-establishment of business relations with the world and the region, after the multiannual period of isolation, has become one of the primary activities of the CCV, which tried to present the capability of the economy of Vojvodina to potential partners as efficiently as possible. To a considerable extent, the Chamber worked on standardization of the local economy and its alignment with the economies of those EU countries that were the most important business partners of the economies of Vojvodina and Serbia in the new century. 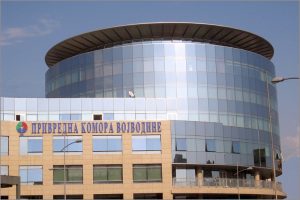 Awards that the CCV traditionally presented during the last few decades to the most successful business people for the highest qualitiy of service as well as for design.

Due to the Global Financial Crisis of 2008, there was stagnation in the work of the Chamber of Commerce of Vojvodina exacerbated by some new legal acts referring to the chamber system in Serbia. The way out of this condition was made after the new Act on Chambers of Commerce was passed in 2015, which included the chamber system, to a great extent, in the direct law-, regulation- and decision-making related to the economic life of the Republic of Serbia.

This required significant changes and a whole new way of work and internal organization, as well as appropriate technical improvements within the Chamber of Commerce of Vojvodina, which was launched after the personnel changes in the Chamber at the end of 2016 and the beginning of 2017. The new directions of the work and development of the Chamber and its new internal organization helped the CCV to define its role in the creation and positive development of the business environment, and most importantly those tasks in the work of the Chamber that were of primary importance for the membership. The changes that followed in the work and organization of the CCV triggered a series of subsequent changes, which turned into a process that is currently going on as well with an obvious tendency become a system of permanent changes, which would be a safe prospect for further development of both the Chamber of Commerce of Vojvodina and the chamber system in the future.